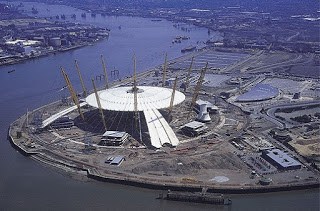 If a Armeec Arena is frozen in the swamp of unfulfilled underground parking, lack of escalators from street level to the three levels of the arena of plugs in walking out of the hall blvd . “Tsarigradsko Shosse” cork Release drive from the funny little ground parking, expectations for future stop on third metro line because its transport integration to date (tragically) boils down to two trolley subject to daily urban traffic jams, extremely Cheesy its management during events that can only tightened belts “Do not go to”
lock the doors, super “secret” partition on the opposite properties belonging to recent military and future development, then the owner of the O2 Arena in London develop its facility so that it attracts more modern visitors that it is a concert hall in №1 world that is №2 tennis hall in the world (in terms of capacity [1] ), and on top of that and willing to live in North Greenwich , which also has a jewel to her park Greenwich , home to the royal Observatory and is in close proximity to the financial City of London ( the other side of the River Thames ).

Let’s first mention how you got the room. On 31.12.1999 In connection with the start of the new millennium in this place was built a huge domed tent – Millennium Dome in which throughout 2000 holds various attractions and exhibitions collectively called Millennium Experience. More about this experience can be found here: https://en.wikipedia.org/wiki/Millennium_Dome#Millennium_Experience . In 2003 construction began on the O2 Arena , which was completed in 2007. Due to unavailability of cranes, the roof of the arena is made on the ground, then raised to place.

With a capacity of 20 thousand. Souls O2 Arena is the second largest in the UK after the one in Manchester – and functionality of pavements, and possibly displacement of seating like her. It was named its chief sponsor – telecommunications operator O2 – a division of Spain’s Telefonica.

Owner of the entire facility is the state agency Homes and Community directly subordinated to the Ministry of Housing, municipalities and regional governments. Please? Say it again … If you were there live no matter whether or not there is an event, never assume (with Bulgarian savvy) that this thing was built by the state and state structure, never. Here is the site of the agency: https://www.gov.uk/government/organisations/homes-england .

First, the entire O2 Arena is surrounded on two levels with shops, restaurants and Outlet Mall (it’s built over the last three years) . There is a bowling alley, cinema with 11 halls.

Second, though in recent years the complex were built several concert halls for smaller scale performances.

Third, the complex is integrated in the air ( Emirates ) , river, rail, bus and automobile (two tunnels under the river) infrastructures in a way, that you wonder how exactly you want to reach the O2. Third, the new wave of modern buildings is closing (the first was completed in 2016).

Fourth, the complex has four above-ground parking whose capacity corresponds to what can and pour regularly in O2.

Fifth, during the last year it was built as a collar covered bond (designer canopy) connecting the exit of the subway and buses to the entrance of the complex. I can only guess that besides convenience (between the metro and the room not they fall) in the future is likely to emerge this collar any more services for entertainment or retail outlets.

Sixth, the O2 arena has the ability and capacity to attract as concerts and sporting events and exhibitions, traveling exhibitions, museum collections and all attractions. The undeniable jewel for 2019 is the visit to the museum of ABBA ( from 06.12.2019) , which will be there six months. Great experience before the concert, after shopping or just walking in the O2. Genuine Accessories and albums are wonderful final walk through time with ABBA. Priceless!

Needless to mention you that this is the area along the Thames – North Greenwich , which until the construction of the Millennium Dome was similar to that around Armeec Arena (demek nothing), but with thought, perspective, construction of infrastructure support (not corruption ) and healthy relationship with private enterprise for 20 years has become a perfect neighbor, fun, pride, preferred location and bedroom of many people. I do not listen to blather populists who “shifted” the financial center of Europe from London to Dublin and Amsterdam. Jump to see how effective the crane is on Canary Wharfand around (opposite on the other side) and then talk that “predatory” investors have lost faith in the future of London as a financial capital (excluding currency speculators – it’s their job).

Fandakova should go and ask and Sadiq Khan, and Boris Johnson (the former mayor of London), and the mayors before them how manage than half marshes and abandoned docks to make unique experiences of those places and to increase the value of the property owners ( small and large) several times about 20 years in terms of the biggest financial crisis in the world after that of 1930

Recently (12/12/2019) took place last extraordinary parliamentary elections in Britain who managed to gather support for Brekzit. We shall see what will happen, but it does not matter which of the two scenarios will take place. Principles and values of liberal democracy, private property and initiative will guide the future development of the UK. Whether imperial bias (even losing Scotland and Northern Ireland) or a leadership role in the EU the UK will continue to be a major center of gravity and saw investors “vote” firmly UK, and not for rulers in States where indiscriminate stealing from the EU and your property is not guaranteed.

(Note. In the last one hundred years Britain was forced to withdraw from all its overseas colonies. The point is they retreated you are from the UK. I will never retire. So even formally independent future mavericks will always be part of the Community .)